Sifu is a game about seeking revenge while trying to look as cool as possible and also trying not to age. It’s packed full of interesting mechanics that set it apart, and it’s important to understand them well to make sure you can actually get through the game without turning dust.

One of the best ways to create your own playstyle is to choose which Sifu skills you want to use against your enemies. There are a lot of different skills in the game, and some are definitely more useful than others. It is difficult to determine the best skills of Sifu, because at the beginning of the game, you could take something that is not useful at all, despite its power.

To help you, we’ve gone ahead and put together this handy guide to what best Sifu skills are, how Sifu Skills work, and some other information that will help you start strong and finish even stronger.

How do Sifu Skills work?

Sifu’s skills cost experience to unlock. You’ll gain experience by killing enemies and can then spend it at shrines, in your house tree, or every time you die, to unlock new skills. Skills are also locked to ages.

Each has an upper limit at which it can be claimed based on the coins on your pendant. This means you’ll need to keep this in mind when choosing and try to keep your age down so you can keep your options open. Here is a list of skills and the ages they are related to:

Each skill costs a certain amount of experience to unlock, and you can pay that cost an additional five times to unlock the skill permanently. This is because all of your skills are taken away from you if you die too much.

While there’s plenty to choose from here, never fear, we’ve picked out six skills that are particularly worth picking up, and even permanently unlockable where possible if you plan to re-level to upgrade. your skills, or if you’re fighting against a specific boss.

What are the best Sifu skills?

Here are five picks we think are the best Sifu skills: 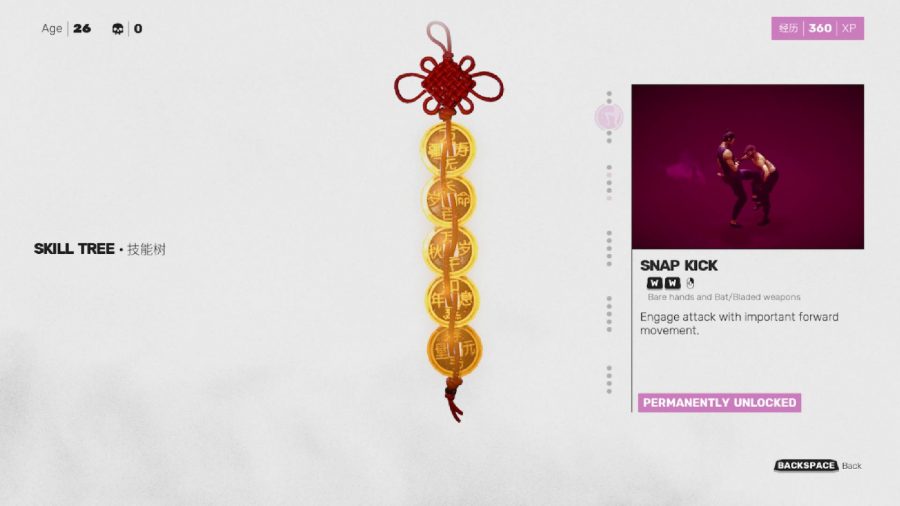 Our second pick is the Snap Kick. This is an attack that allows you to cover a decent distance in an instant with a quick front kick. While not particularly strong on its own, it’s very easy to interrupt some enemies from further away, and it’s a great starting move to follow up on for longer combos.

It doesn’t work as well against bosses due to the usual super armor many of them have, but it will help you against almost anyone.

The first is Environmental Mastery, which can be unlocked as long as you’re under 60. Environmental Mastery is a skill that allows you to throw ground weapons at enemies without picking them up. It’s a surprisingly powerful move because it means you have range at a speed that isn’t granted in-game initially.

However, it is also powerful because it turns other random objects into weapons. Whether it’s money bags or stools, you can smack them at enemies to knock them down before moving next to them and hitting them while they’re down. This makes a few mini-boss fights downright laughable and should be the first skill you learn.

Then comes the taking of arms. This is an essential skill for one of the later bosses, and it allows you to catch items thrown at you. You’ll have random bricks and bottles thrown at you pretty early in the game, and they can be tricky to deal with.

This skill allows you to turn those attacks into your strength and will regularly knock down a fight where you are unarmed. 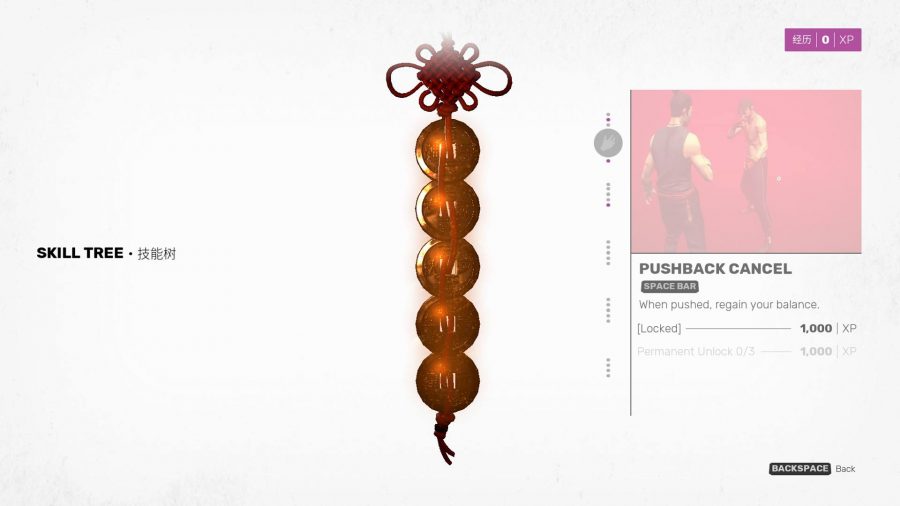 Pushback Cancel is pretty much exactly what it sounds like. You simply press the guard/parry button to prevent yourself from being knocked down.

You’ll mostly only be knocked down by bright front kicks or when your structure is broken, and while this isn’t a regular occurrence, it can cause you to smash through an obstacle and take extra damage, or even knock yourself down. fight against another group of enemies. None of these results are good, so this skill is great for staying alive.

Then there is the floor counter. As if to be pushed back, you will sometimes end up on the ground. While your first reaction to this is to dodge oncoming attacks, it’s actually much more effective if you can just counter enemies as they strike.

So taking Ground Counter is a surefire way to ensure you can sneak in some extra damage while ensuring you’re also well defended.

Punch in the crotch

Finally, we have Crotch Punch. This simple move allows you to duck under a high attack and hit an enemy where it hurts. It will stun them briefly, making it easier to follow up on attacks and combos, and the added evade window is very handy, as most of the random grunts you fight will tend to try to hit you in the head.

It’s not a particularly sophisticated move, but there’s no denying the simple power of reaching down and punching someone below the belt.

There are all the best Sifu skills you can unlock in the game. Make sure to check out our list of Sifu Shrine locations to get you back into the action faster.