Since Atty’s death. Dong Puno – RVP of his subordinates – on February 15, I had to deal with the loss of a man who played many important roles in my life: mentor, friend, boss, ninong and kapamilya. (See Remembering Dong Puno, My Mentor)

Forty days. This is how long the world has been deprived of the presence of RVP so far. How surreal is that? Perhaps as odd as having to remember to refer to him in the past tense, something that still doesn’t come naturally to me. Because the Dong Puno I know always looms large in my thoughts, as I’m sure he does in the hearts and minds of everyone who misses him dearly, especially his family.

On behalf of the Puno family, his son Donnie thanked everyone who sent their respects and condolences. “Dad’s last public appearance was around 2012. We weren’t sure if people still remembered him,” he said. “It was a heartwarming revelation to us that despite his absence, Dad’s struggles were not in vain and he was not alone on his journey…We hope his journalistic idealism continues to create ripples in our national conscience, as he did for the many lives he touched.

I am one of those lives. As I sit here trying to deal with my personal grief, I am also constantly reminded of what the loss of RVP means to us, the Filipino people. And the magnitude of this collective loss amazes me.

Atti. Dong was an accomplished media professional. His precision with words, whether written or spoken, stemmed not only from his genius, but also from his sense of justice and responsibility which Donnie called the “tireless search for truth and fairness” of his father.

His long-running column My Viewpoint, which appeared in The Philippine Star as early as the 1990s, is irrefutable proof of this. RVP’s insightful observations and in-depth analysis have made him an expert, a reliable source of reliable information. But with The Star’s reach, he became more than that: a thought leader, an influencer, long before those concepts became the buzzwords they are today.

During his tenure as a public affairs host, he never shied away from tackling controversial or contentious topics. He was never shy about asking tough questions. According to ABS-CBN News chief Ging Reyes, “No one has done an interview like him. Dong was incisive, insightful and thoughtful. He did his research; He did his homework. He had no no frills, no drama, but he was always polite and fair to his guests.marami ang talk show hosts and interviewers ngayon pero iisa lamang talaga si dong puno.

It’s no wonder, then, that he has received numerous awards and accolades for his body of work.

RVP went on to become a mainstay in the newsroom as ABS-CBN’s senior vice president of news and current affairs. He was certainly one of the greatest, setting the bar high and exemplifying credibility, responsibility and professionalism.

As he progressed in television, he proved to be a visionary. Besides pioneering the first exit polls, he also ran the first morning show in the Philippines. He preached by example and broke down barriers without ever growing up, without ever resorting to sensationalism, and above all, without compromising on his principles. He brought dignity and gravity to the profession, and he made it so easy that many of those around him were encouraged to do the same.

Atti. Dong’s passing recalls what Kurt Vonnegut wrote in his novel Cat’s Cradle: “Of all the words of mice and men, the saddest are: ‘It might have been’.” caught up in wishful thinking – following endless trails of powers, powers, powers and powers, especially the powers. I’m very curious how RVP would have shown us a better way of doing things if he was at his peak today?

How would he have embodied the highest standards in this age of rampant misinformation and misinformation? How would he have managed to prevent the level of discourse from sinking to its current depths of murky vitriol? As we face one of the most pivotal elections the country has ever seen, how would he put each candidate through the wringer to help us determine the most worthy of them?

That we’ll never know is both sad and sobering. RVP has mentored a whole generation of press men and women, myself included, who must now navigate a new and constantly changing multimedia landscape. One that’s certainly more ruthless and seemingly alien to what we’ve grown accustomed to. Without him, there’s one less vanguard to remind me – all of us – to stay the course, even if the course has changed beyond recognition. 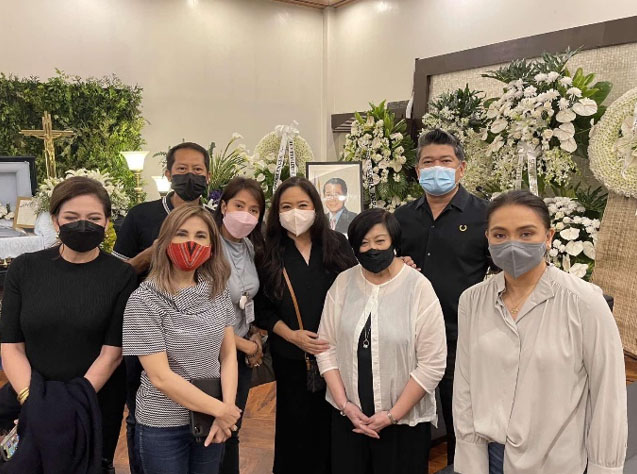 But Atty. Dong’s legacy gives me hope. I know we are not rudderless precisely because he mentored us so selflessly. With his compass in mind, I know we can chart new paths while staying true to our values. Plus, he showed us what it takes to hit the skies and break new barriers.

Perhaps RVP’s greatest legacy to us, his mentees, is how he encouraged us to be the best versions of ourselves. This he did thanks to his advice and unwavering support. According to GMA7’s Vicky Morales, weeks after she was fired from a broadcast job, Atty. Dong offered her a co-hosting job. “I was over the moon (to) work with one of the brightest minds in Philippine television was such a career jackpot…My heart is filled with gratitude for this person who believed in me at a time when I wasn’t sure if I believed in myself It was the trust he had in me and many other people like me that made us really want to keep improving Kasi ayaw namin mapahiya kay Atty .dong.” 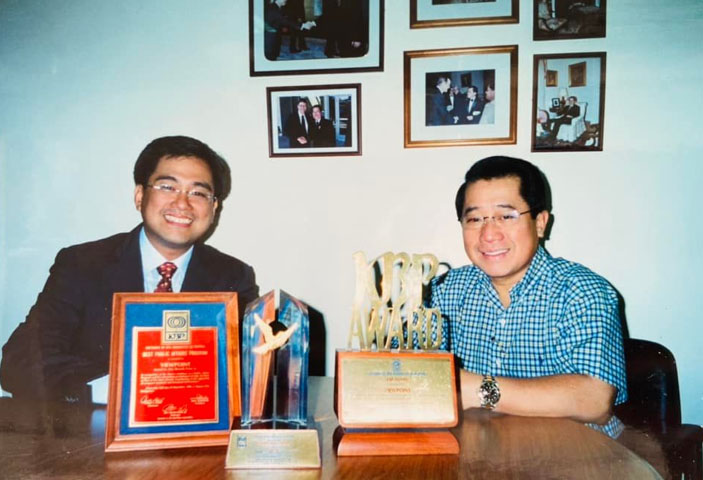 RVP has also blessed me with this kind of generosity. The potential he must have seen in me – first when I was his broadcast journalism student at the Ateneo, then later when he invited me back from ABC News to New York to joining ABS-CBN – are two of the most defining moments of my life. He told me that for the media to have any real value, it had to be put at the service of our kababayans. I know for a fact that, like Vicky and Rico, I wouldn’t be who and where I am today without the trust of VPR.

One thing is certain: there is no way to fill the void left by someone like RVP. The best we can do is honor his memory by doing what he did. And, by some measure of imagination, doing what he could and would have done too. Left photo: RVP with sons Ricky and Donnie, and wife Christy. Right photo: Ninong Dong with my husband, Nonong, at our wedding in 2002.